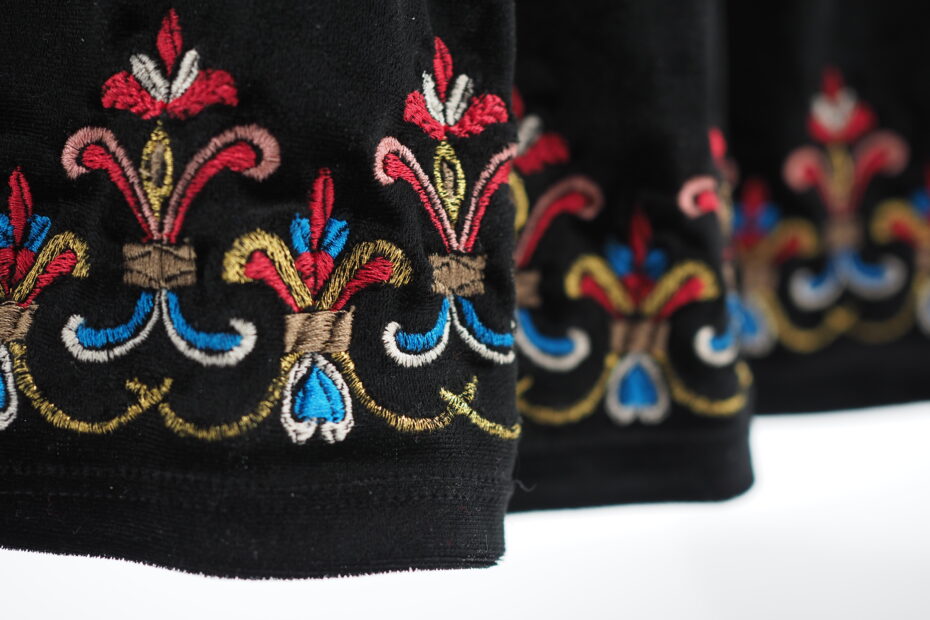 Þjóðbúningar, are they called in Icelandic. And this is what happens, when you work in the movie industry AND have a thing for history: you rape the National Dress of the country you live in.

This whole embroidery endeavour made me curious whether I could create my own version of the national dress for children. At the last redesign / edition of Iceland’s National Dress the children had finally gotten into consideration and received their own dresses. A farmer’s version, that underlined the Nation’s heritage. A version, that doesn’t seem to suit the modern Icelander in the capital region. An Icelander that is strongly influenced by America and continental European countries, thriving towards wealth and a high living standard.

It was rather a coincidence that I stumbled across a black velvet dress (the traditional material for the National Dress of grown up women) and decided to design my 101 version of a Þjóðbúningar.

25 hours of embroidery plus design and tests later I had created my 2022 approach of a traditional dress for a 2 year old.

Note: An existing dress, I have taken apart to machine embroider on it, after designing the pattern digitally is of course by no means a replacement for a handmade dress, but it is an opportunity to create a preview / example of how the future could look like. I am aware that I have most likely broken all rules on creating this take on modern tradition and I sincerely apologise to the Icelandic Nation for it.

The dress became a gift for the greatgranddaughter of an Icelandic goldsmith, that spend his life creating decoration for Þjóðbúningar.